MASTER
Home
About
Get There
Tickets

By Hotel of Horror (other events)

Every neighborhood has a version of The Witch House. A house with a life of its own. A home that is often decaying, over grown and gives safe haven to the unusual. This home is often sensationalized and ridiculed as opposed to being ignored or even praised and often gravely misunderstood. It seems that the rebirthed legacy is never escaped by each reared generation. The Infamous Lake House Hotel has been whispered to be many things, the rumors are abundant and the documentation just as purposeful. In the late 1800’s she was used as corporate offices and shelter for mine workers, giving herself for business, room and board, and pleasure. Money was made and success was achieved at the price of many men. An uncountable amount of deaths resulting from mine accidents were reported or were the men sacrificially given over in trade for those earthly riches. The Ladies of the Lake House provided well for the men- hidden deep in the mountains undetected by the masses in exchange for the simple blood spill and harvesting of those mortal souls. Those spirits still bound being nurtured by the descendants of those ferocious creatures- their chants still heard in the stagnant air of unfinished business.

No one knew in 1891 when they began mining the rare white clay that was found abundantly nestled in Saylorsburg, Pennsylvania that they would be building the most notorious Ghost House in the North East. The geological make up of the surrounding lands and the encapsulating façade of this infamous structure create not only an entrapment of energy but a beacon for displaced souls. The Victorian Era home of Edward Saylor which once looked like the traditional quaint Bed and Breakfasts of today began a transformation in 1893 to become what we now see as The Infamous Lake House Hotel- showcasing the materials being produced by The Blue Ridge Enamel Brick Company. It was then that the buildings brick and tiling, made of the perfect composition of quartz, carbonate materials and limestone began housing the history of today.  Upon entering you are sure to see and feel the remnants of a tragic past being depicted. Visit Altered Nightmares 20 13 Ghosts Spiritus Aeternus.

Light Out Tour- Just You, The Building, and The Blackness
Friday Night, September 13th, 2013 & Thursdays in October

You will feel your senses begin to sharpen with every turn as you journey deeper into the ponderous abyss of the infamous Lake House Hotel.  You will begin to feel as if you are being watched as the darkness layers around you. The shadows of the past live rich lives inside this turn of the century hotel, dancing from room to room. Will her secrets surface in the sounds of your own beating heart?  Will time slow around you long enough so you may hear the breathing whispers of this house? Being offered for the first time in history- experience what only a few have encountered- lights out in The Lake House Hotel of Horror.

Lights Out Tour and Exhibition Macabre tickets are ONLY available at the Lake House Hotel Box Office. They are on a first come, first served basis.  Prices are available on our website.

Please arrive atleast One Hour before closing time. Ticket purchase is non-refundable. Online ticket sales are for the convience of credit card use and there for has a service fee.  Box Office has ATM onsite. 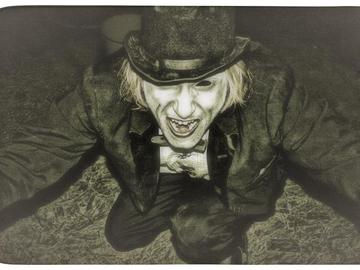 This ticket voucher needs to be handed in at the box office window in exchange for event entry ticket.

other events by this organization